Compiled and written by Cecily O’Neil

As many of you know, we lost a dear friend and fellow activist earlier this year. George Haeseler had moved to North Carolina to be closer to his adult children a few years ago, and occasionally visited us in the Broome County area. He was an inspirational leader and role model. Some of his many friends have offered the following remembrances: 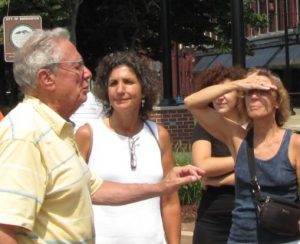 “George was very generous. At his 80th birthday party, instead of receiving gifts, he asked people to donate the money to the peace activist fund…His kindness is certainly remembered. We visited him in North Carolina once and he couldn’t have been more hospitable… I think George Haeseler grew old gracefully and with a full knowledge of affairs of the country.”

Over many years George led and supported BCPA as President, counselor, Treasurer, Letter-to-Editor writer and outspoken advocate for peace. “When the second war on the people of Iraq was being hyped by the Bush-Cheney gang, George and others placed an advertisement “NO WAR ON IRAQ” in the press and on several area billboards. Then, George and eleven others stood on the top step of the Federal Building in Binghamton with a banner that read: “War should not be the business of the U.S. Government. This office is closed”. George had a bulldog grip on honesty and integrity.

George was proactive. “He loved supporting organizations that were challenges.” George arranged bus trips to Washington, DC and New York City, and as an active member of Broome County Peace Action, “he was constantly making proposals that we almost always approved.”

“I remember George being our moral compass in the Stu Naismith Chapter 90 of Veterans for Peace. He was an extremely generous and activist person. One time he loaned us his Toyota van to drive to the School of the Americas Watch in Columbus. GA. He was always there for progressive, peaceful causes. In his later years he said, “If I can’t be there in person, I’ll send my dollars!”

Many of his Broome County friends added their fond memories of George’s beloved wife Arlene. “I remember Arlene as someone who always wanted to do good. When we organized the salad preparation at the UU Congregation of Binghamton for the Sarah Jane Methodist Church soup kitchen, she was a weekly regular. At her wake, George gave each person who came to pay their respects one of her many scarves [which] I still have.

When scarves are shared and friendship is honored, we think of you, George and Arlene.

From the October 2020 BCPA Update newsletter, download the PDF 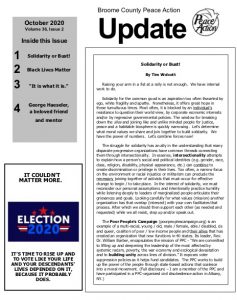