A New and Joyous Way to Remember Hiroshima and Nagasaki

Veterans for Peace, Chapter 90, works closely with Peace Action of Broome County, N.Y. The two groups meet together the second Saturday of each month, VFP at 10AM and Peace at 11AM.

For decades Peace Action (formerly Sane Freeze) organized an annual Hiroshima or Nagasaki Remembrance Day event. Once, we served breakfast for over 100 people after ringing the huge ground bell in front of the First Congregational Church in downtown Binghamton. Over the years the numbers dwindled with sickness, disabilities and deaths. We realized that we needed to get younger people involved, but our success was limited.

A plan facilitated by Doug Garnar was created to transition our remembrance events to a Children’s Peace Fair. On August 6, 2019 at 8:11AM, leaders from our two peace groups surrounded by smiling children and their chaperones gathered around the bell, turned the large wooden wheel and rang it in memory of the many thousands who died in Hiroshima 74 years ago. 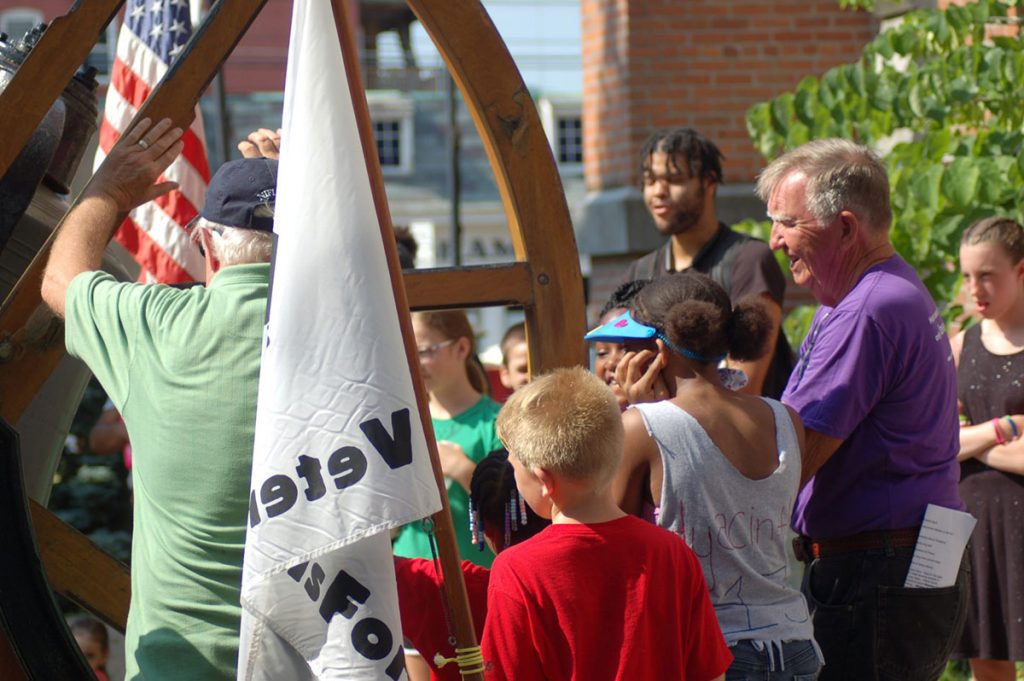 When the children arrived shortly after 10AM a sign of relief swept through all of us who worried all this could be just old folks dreaming that kids would come. But come they did – by the dozens until they numbered over 100! Our gratitude goes out especially to the Broome County Urban League chaperones who hiked their kids, ages six to fourteen along city streets to be part of the Fair. Quickly, children volunteered to help ring the bell, eager to participate in the activities laid out before them.

A handful of elementary students, part of Kenny’s Kids choir, began to sing peace songs on the steps of the church. Some kids flocked to do sidewalk drawings or paint messages on rocks to take home or to leave in public places with phrases like “Peace Begins with Me” or “Love not Hate”. Two young women, one a Haitian-American, the other a Haitian immigrant danced to a lively beat that resonated with the crowd.

This was followed by a 27- member middle/high school song and dance group, SRO Center Stage (summer theater camp) directed by Hilary Rozek. They performed a few numbers from “Lion King, Jr.” The crowd moved in harmony to the performance. On the church lawn, Silivia Martinichio taught yoga to some kids while being upstaged by the postures of a three- year girl. Meanwhile, Andru Bemis, an accomplished banjo, fiddle and guitar player roamed around the site as a Fair Minstrel playing folk songs and encouraging kids to sing along and use his instruments.

The sky was blue, the sun was blazing, but we were prepared. Popsicles, ice cream, iced water and lots of watermelon quenched thirsts. It was a great day! (For a video and photos of the event go to childrenspeacefair.org) Still glowing from the success of this year’s Children’s Peace Fair, we are already planning for 2020. We encourage and will advise other peace groups that want to create their own children’s peace fair.