A reflection on Peace Action’s future

Broome County Peace Action was originally formed in the 1980’s to address through the “Freeze Movement” the proliferation of nuclear weapons. Since then we have also been engaged in the issues of war making, cultural militarism, American “exceptionalism” as well as the U.S. dominance of world affairs through military and economic means. Over time, we have come to recognize climate change and its related social justice realities as important peace issues that we need to consider. Now the Covid-19 pandemic is alerting open-minded, open-hearted people of the essential unity of humanity. The emotional and economic impact of social distancing, necessary as it is, causes severe hardship to many worldwide. This opens up a whole new opportunity for advocates of peace and justice. 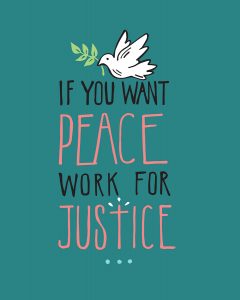 The U.N.’s Secretary General has called for a global ceasefire of all conflicts in order to minimize the spread of this virus. Just as general disarmament and climate change mitigation agreements help humanity become more responsible, so too could international cooperation with the equitable distribution of necessary medical equipment and supplies. Survival of the human race, and indeed of most life on this planet, is not a given here.

We have long known that people die from warfare, from climate change, and from unexpected lethal infections. The problem is that American’s approach to each of these realities is severely hampered by our culture’s overwhelming obsession with individualism, personal convenience, and narrowly defined responsibilities. Getting our representatives in the rooms of power to cooperate is an absolute necessity. Fear, resentment, mass incarceration and apathy to the needs of the vulnerable among us has got to end. Articulating a vision of the common good, and working to make it a reality is hard, but essential work. We in Peace Action, allied with other groups, must come together to do this, or we will have no hope.

These are hard words for hard times.