Jack Gilroy shares a letter sent to George, a friend for about 35 years, a little before George’s passing. 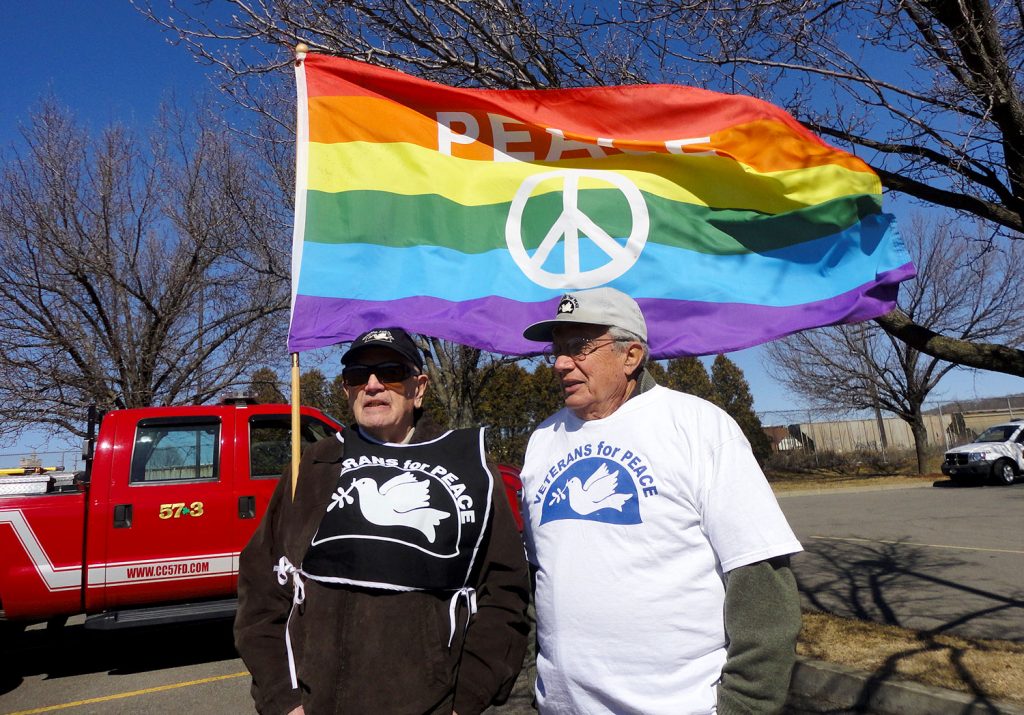 I remember well when I joined Sane Freeze in 1985. I was feeling pretty lonely at the high school where I taught. Some were still referring to me as they had since the Vietnam era when I got the name of Don Quixote…the Man of La Mancha. But at Sane Freeze I was just another friend of peace and justice. You, Roland Austin, Greta Lake, Arvid Antonson and Helen Spiegel all made me comfortable.

I also remember our small group from Sane Freeze (you, me, Charlie Schultz, Jim Clune and Roland Austin) doing civil resistance at the Seneca Army Depot, the largest nuclear weapons reservoir in the world, located in Romulus, NY. I’ll never forget your generous act of kindness as you passed the hat to help defray the expenses that I had incurred flying in two speakers from Washington, DC.

Your support was ongoing. When the Chinese people revolted in Tiananmen Square, you came to my high school social studies classes to help with computer work and to help us contact original sources in Beijing.

Our work together evolved. It went beyond Sane Freeze to Peace Action to Veterans for Peace. Stu Naismith, you and I went into classrooms (in Maine-Endwell, Trumansburg, Binghamton and Waverly, NY) to do counter-recruiting. Subsequent to the “Shock of Awe” events of the 2003 Iraq War, we supported the actors of Broome County Mental Health Players in their participation in a small play I wrote about students deciding on peace or war. Furthermore, it’s difficult to count the number of Hiroshima and Nagasaki events we did over the decades.

Your letters to the editor and Viewpoint articles were marvelous… always so logical, so reasonable in a culture so unreasonable—the best for many years going.

I particularly remember the joy you showed during our action on the first day of “Shock and Awe”, March 19, 2003. Twelve of us including college students as well as Len Bjorkman, Jim Clune and Tim Taugher standing on the steps of the Federal Building in Binghamton holding a banner to block entry to the building that read, “The Business of the USA should not be war…this office is closed.” Eventually police came, cuffed us and put us into paddy wagons.

You said afterwards that your involvement in the action was your first and only arrest, and you were so proud that you did it. We were so proud of you, a man of organizational and literary action standing up for justice, walking the walk.

It didn’t end there. I have photos (taken by Joyce Donohue) of us marching in parades in downtown Binghamton carrying the Veterans for Peace flag with your arm raised and chanting, “BRING ‘EM HOME, BRING ‘EM HOME”. Remember how we were booed in 2003 and 2004, but by 2005 applause began to erupt. Eventually, ignorance and false patriotism reduced as the truth of the slaughter began to make people question why the U.S. was there and doing such horror. Ignorance and self-imposed denial are still around George, but when our Veterans for Peace and Peace Action of Broome County members take to the streets, your intelligent and courageous persona will be with us.

Peace, Love and all good things, my forever friend

This entry was posted in Southern Tier Peace Makers. Bookmark the permalink.