Remembering WWI—There Is No Just War

My father, Francis Gilroy, a US Navy airman wrote home to his mother from Queenstown (Cobh) Ireland after 11 Am on November 11th, 1918 that he had “been up”. “Up”, meaning flying in a seven-ply wood wing aircraft, a submarine spotter plane with bombs. WWI was officially ended. Letters no longer censored, he was now free to tell his stories.

Many years later, my father told my brothers and I that he was glad he never sunk a German U-Boat. 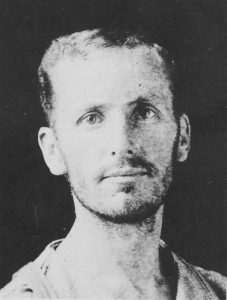 I loved and respected my father but I respect WWI resister, Ben Salmon of Denver, Colorado even more.

Ben Salmon, like my father, was a devout Irish Catholic. Separated by many miles, Carbondale, Pennsylvania and Denver, Colorado—Francis and Ben were on a different conscience track. My father understood he should follow flag and church. His country called for him to train to kill the enemy. The leading Catholic voice in support of war in 1917 was the United States National Catholic War Council, today known as the United States Conference of Catholic Bishops. My father, son of a Pennsylvania coal miner, answered the call of country and church to go to Europe and kill the “enemy”. Ben Salmon, son of a Denver carpenter refused to answer the call.

Ben Salmon refused to respond to a questionnaire for induction into the US military. Arrested, he was put on trial for treason in a military court although he was not a member of the military. Salmon was sentenced to 25 years of hard labor in US Federal prisons.

In federal prison, Ben Salmon was abused spiritually, emotionally, physically. He stopped eating because of the abuse. Prison staff forced a ceramic pipe down his throat to keep him alive. His incarceration was well known around the United States. Ben Salmon refused to accept a military assignment. “The Germans are my brothers” he said. “I shall not kill them.”

As a Catholic he was refused permission to give his confession or to receive communion (later rescinded). He was moved to Ft Leavenworth Kansas federal prison and afterward, six other prisons. A once robust man, Ben Salmon was now reduced to a thin, starving person whose crime was his refusal to train to kill.

Armistice Day, 11/11/1918, ended the war but not for Ben Salmon. He ended the year in prison and it was not until 1920 that the US Army, convinced Salmon was crazy for not wanting to be part of the war machine like his Church leaders and millions of fellow Catholics, decided to send Ben Salmon to an insane asylum.

Transferred by train from Utah to Washington, DC, his frail body guarded by two burly Sergeants and a Lt Col., Ben Salmon was incarcerated in St Elizabeths Hospital for the insane in 1920. It was a gift from heaven for Ben Salmon. He was given a typewriter and soon began telling his story. He recorded his reasons for opposition to killing based on moral grounds and his firm acceptance of the non violent Jesus of the New Testament.

The American Civil Liberties Union was found in 1920 in Washington DC. It was the work of the ACLU and some Catholic priests that sprung Ben Salmon in late November of 1920.

The Denver Post wrote of Salmon as a “coward with a yellow stripe up his back”. Unable to go home to Denver where he was hated for his opposition to war, Salmon found work in Chicago. Physically broken by his prison experience, Ben Salmon died 12 years later in Chicago where his unmarked grave was found in 2015. Supporters of Ben Salmon erected a simple grave marker that quotes Ben Salmon:

THERE IS NO JUST WAR

To learn more about Ben Salmon, go to www.bensalmon.org

Our group, Friends of Franz & Ben is working to have Ben Salmon put on a track to Sainthood. His message of non-cooperation with war-making is a clarion call for all of us to embrace, religious faith, or no religious faith.

This entry was posted in Article and tagged Veterans for Peace. Bookmark the permalink.