On September 9th, Peace Groups gathered at BAE Systems in Endicott, NY and Lockheed Martin in Owego, NY to protest the military complex and promote peace-making development products. Jack Gilroy of Veterans for Peace tried to deliver letters to the CEO’s of both companies and was stopped by security. Speeches, songs, flute music and signs promoting peace and no more war. End billions being spent on military complex. Spend billions instead on the needs of the Citizens of US, clean water, new infrastructure, health care, etc.

Video of the event by Vera Scroggins

Exposing the Merchants of Death

Two days before 9/11, the money-maker day for the arms industry, a coalition of peace and justice activists from upstate New York communities (Endicott, Binghamton, Rochester, Syracuse, Corning, Hornell and Albany) came together at BAE to expose the merchant of death and call upon the workers to demand economic conversion from designing and manufacturing systems of destruction and death to designing and making life supporting systems. We had banners depicting BAE as a worldwide terrorist organization.

Original Invitation to Join the Event 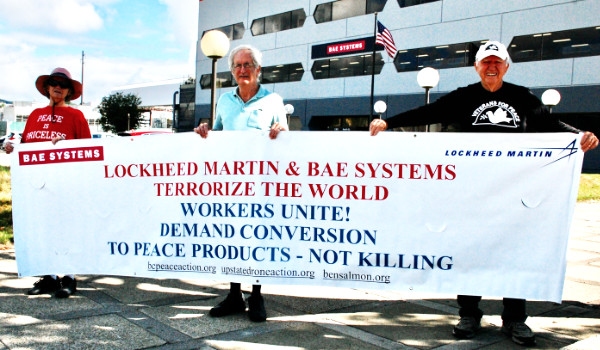 For groups in other areas of the country who wish to join in this effort:

Be at your local arms merchant with baanners, signs, statements, music and song (e.g. Vine and Fig Tree etc) printed out for group singing.

Focus: Transform from systems and products of destruction to real earth and human needs

Contact media–best time for evening news is a morning event on September 9th War Merchants Exposure Day. More information, including a letter to present to your local war merchant CEO:

This entry was posted in Event. Bookmark the permalink.